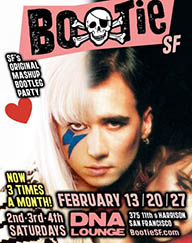 We're excited to announce that DJ TYME & NATHAN SCOT have been selected as featured performers at BOOTIE SF on Saturday May 22nd, 2010! DJ TYME will be spinning all our original mash ups and NATHAN SCOT will take over the three giant video screens at DNA Lounge with a live VJ set. Mark your calendars now, this is gonna be an amazing party.

*** This is the official CD release party for "DJ TYME & NATHAN SCOT: A Mash Up, Smash Up, Mix Up Full-Length DJ Mix” featuring all our original mash up productions that we have completed over the past year. What does this mean? Hundreds of free CD’s for all! Email us for guest list.

Since it isn't "officially" released and we are technically not allowed to pass it out, we are going to leak the whole album onto the internet! All party peoples in attendance will receive the address of where you can bootleg the entire album! Shh...don’t tell anyone!

*** Join us as we celebrate and party extra hard for FOUR BIRTHDAYS!!! (DJ TYME, Debbie, Amanda, and Johnny)...Oh you know it's gonna be crazy!

After completing about a dozen mash ups over the past year we head to the studio. Late nights, sheltered from the outside world, our goal in the studio is within two months to complete about a dozen more mash ups, cherry pick through our library, and put them together into a full length DJ mix album. We've learned a lot over the past year and have had a decent amount of success with our productions, it'll be fun to see what comes of it!

*** Plans for a new website, CD release party, and other big things are underway. Stay connected for updates! 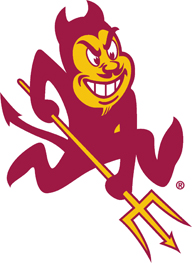 On January 17, 2010, we ventured out to Berkeley, California to watch Arizona State University Women's Gymnastics take on UC Berkeley. We edit several floor routine mixes for Arizona State and this would be the first time we get to see our mixes in competition. Exciting it was and Arizona State did amazing!!!

***Here is a recap of ASU’s floor routine, taken from http://www.thesundevils.cstv.com/sports/w-gym/recaps/011710aaa.html

“Floor was a huge improvement for the Gym Devils, as the team did not have a single fall. With a new career-high, Atkinson won her third event of the night, scoring 9.875 in the process. Johnson performed her way to a career-best 9.825 while Brittany Schuett earned a solid 9.8. Hangartner scored 9.75 for her best routine of the season and Salavec tallied 9.7 on the event. The Sun Devils score 48.95 on floor”